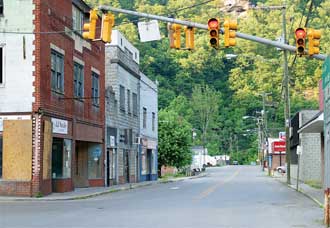 SHARPLES, W.Va. — A tiny Logan County coal town, population 100, is near ground zero in a national debate on coal mining.

The debate is coal vs. environment. Soledad O’Brien of CNN explored both sides of mountaintop removal, a controversial method of coal mining. It aired on CNN at 8 p.m. Sunday, Aug. 14. It will be aired a second time Sunday, August 21.

Millions of Americans are silent on the issue. They don't know how the debate enters their lives.

Coal touches every American who has ever plugged in a computer, watched a television or taken a hot shower. About half of electricity generated in the United States is produced by coal-fired boilers powering steam turbines.

Coal miners and pro-environment groups sit across from one another over a schism about mountaintop removal, a destructive yet highly effective form of strip mining.

James and Linda Dials, of Sharples, were featured prominently in the hour-long special.

“The way it is in southern West Virginia, it’s the coalfields,” James Dials said. “It’s what we’ve done for a hundred years.”

James, a West Virginia native and 30-year coal miner, paints the fight as one pitting jobs versus the environment. He and his wife say they have never been concerned about the environmental effects of coal despite living near mine sites for decades.

Opponents of the surface mine contend the method endangers residents through exposure to dangerous heavy metals found with coal. It also pollutes the watershed and causes downstream flooding.

For months, members of both sides awaited a ruling by officials about a permit for Spruce No. 1, one of the largest mountaintop removal sites ever proposed in the U.S. The permit was eventually revoked.

Sharples sits at the foot of Blair Mountain, the scene of one of the largest armed labor battles in the U.S. history. Armed citizens and federal troops fired on union coal miners marching to unionize the Logan coal fields.

The march to Logan was a direct result of a shoot-out known as the Matewan Massacre. Matewan Police Chief Sid Hatfield and armed miners traded gunfire with men from the Baldwin-Felts Detective Agency.

When the gun smoke cleared May 19, 1920, seven detectives were dead along with Matewan Mayor Cabell Testerman and Detective Albert Felts. Two miners were killed.

Baldwin-Felts mine guards were despised in the southern coal fields. They were often used to evict families from coal company-owned shacks.

Twenty-two people were charged in the incident, but the charges were dropped.

Days later, Hatfield and Deputy Ed Chambers were assassinated by Baldwin-Felts detectives in front of the courthouse at Welch, W. Va.

After the shootings an air of fear gripped the coal fields. Members of the United Mine Workers vowed revenge and thousands of them met at Marmet near the state capitol to march on Logan.

The Battle of Blair Mountain marked the only occasion federal troops dropped bombs from airplanes on U.S. citizens.

Today, Spruce No. 1 sits atop a mountain across a valley from Blair Mountain. Coal mining foes had the scene of the 1921 battle placed on the National Register of Historic Places.

The peaks might as well be separated by the fabled Rubicon River crossed by Caesar in 49 B.C. Both sides of the debate are at a point of no return because one side will never compromise with the other.

The CNN segment hits most of the usual points of the mountaintop removal debate. The Environmental Protection Agency versus West Virginia politicians, health and environment versus jobs and economic development and other common points of disagreement were explored.

The segment didn't devote a great deal of time to an important issue -- the United Mine Workers of America. Logan County became a UMWA stronghold after the battle. Massey Energy and Arch Coal historically run non-union mining operations. After the dispute over mining around Blair Mountain began to unfold, Massey Energy was absorbed by Alpha Resources.