Investors once bought newspapers to become millionaires. In the digital age, only a billionaire like Jeff Bezos can afford to own one. 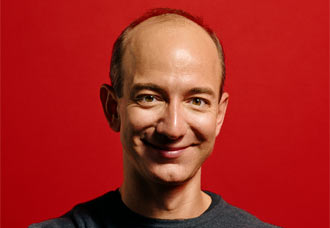 The announcement that Jeff Bezos of Amazon paid $250 million from his personal fortune for the venerable Washington Post left many experts scratching their heads. Crack observers in the news industry all have opinions on the outcome.

The Post Co. agreed Monday to sell its flagship newspaper to the Amazon.com founder. That ended the Graham family’s stewardship of one of America’s leading newspapers organizations after four generations.

Bezos, according to forbes.com,  spent less than 1 percent of his net worth on the sale.

"We kew it was time to sell," Graham said in a video interview published on the Post's website. "I hope the hell he makes a profit, but that's not why he bought it."

The Post's report of the sale appeared in a position revered by newspaper editors - a one column, three line tombstone head under the nameplate. The spot is reserved for events like a declaration of war, earthquakes and explosions that come minutes before a deadline.

I wonder if the term is another nail in the coffin of printed newspapers.

Legacy newspaper is a foreboding term that merely signifies adjustment, development and reversal in a financially troubled industry.

The internet has been a disruptive innovation since its kraken-like release on an unsuspecting globe. The kraken's attack didn't begin in earnest until 1990s when widespread use began.

Bezos founded Amazon.com in 1994 and its companies reported $61 billion in 2012. How many companies can amass that much wealth in a mere 18 years. It's a benchmark for business. It's part of the NASDAQ 100 and S&P 500. Both are used to gauge the daily success or failure of the stock market.

Bezos is the king of disruptive innovation. His ideas have been adopted by the retail industry. Amazon.com's Kindle has upended and transformed the book publishing business.

Local televisions news crews, radio reporters and newspapers weave themselves in the daily fabric of information consumption by contributing news and information to other news organizations via the Associated Press, and smaller news services like United Press International, Reuters, BBC and Bloomberg.

The AP is a member-owned cooperative that's been around since 1846. AP reporter Mark Kellog reported on Gen. George Custer's death at the hand of the Sioux Indians, a time when newspapers lacked resources to send their own reporters to the front. An AP reporter borrowed Abe Lincoln's hand written notes so he could report on a speech at Gettysburg.

Lincoln's address is considered by historians as the greatest speech ever written.

At any one time, the AP's daily report amounts to one million words. The quantity allows news editors a wide selection of news to entertain, inform and enrage readers.

News is the first draft of history

The collection of information allows those with the long view to analyze and detect trends. Sometimes the reporting itself is disruptive. Reporting by The Washington Post has upended the national government many times and others learned via the AP wire service. Reporting of the Watergate burglary led to the collapse of Richard Nixon's presidency.

United Press International was the first news outlet to report the beginning of Allied invasion of Europe in June 1944 during World War II. It was first to report the assassination of President Kennedy on a fateful day in Dallas.

The news business has suffered through failures. UPI reported that Tom Dewey defeated Harry S. Truman for president. UPI reporters are forever reminded of the error in a picture of President Truman displaying the banner headline from the Chicago Daily Tribune.

Even the Washington Post erred reporting events. The company takes an immense pride as sponsor of the National Spelling Bee, the bane of elementary school pupils nationwide.

The paper trumpeted the winners name one year while a hapless copy editor mixed up the spellings of the winning and losing words.

"The Washington Post editors are reasonably sure most of the rest of the words in the story were spelled correctly," the correction reported, according to the archives of Editor & Publisher.

E&P failed and has been revived, just like the news business has revived itself dozens of times.

Where would we be if newspapers failed to be the first draft of history? Where would we be without television pundits predicting the outcome of a national sensation that would not have scored as news 25 or 50 years ago.

President Jefferson conceded that citizens of the republic must endure the agitation newspapers produce.

"Were it left to me to decide whether we should have a government without newspapers, or newspapers without a government, I should not hesitate a moment to prefer the latter," Jefferson wrote.

During my migration among the nation's finer news publications, I once applied for a job at States News Service just down the street . After a successful interview, owner Leland Schwartz' girlfriend warned against accepting the job. So did the human resources director. I reluctantly followed their advice and landed at a paper that may have been the worst job I ever had.


The worst job led me to one of the best jobs I ever had.

I was a reporter for United Press International and left during of the flashiest news company bankruptcies ever. Another UPI reporter and I conspired to picket The Washington Post when it started using a non-union news service. Being good downholders, the picket line was staffed on days off at the Post and Leland Schwartz' State News Service.

UPI was a disruptive innovator in oh so many ways. You're supposed see that sentence as dripping in irony.

Ever the innovator and always a disrupter, Schwartz now peddles a news sheet of broadcast-style headline. The flashes are printed on the back of diners' receipts at The Old Ebbit Grill, just around the corner from the White House.

In business for 157 years, the Old Ebbitt Grill is the highest grossing restaurant in the U.S. Schwartz' potential readers number among the most powerful disruptive innovators inside Washington's Beltway.

I became one of the disrupters when I built the first online newspaper in Florida -- almost before the Internet was cool. Bezos was just getting started. Nobody was willing to bet on his success. I think the News-Journal was afraid not to bet on NJC.

The News-Journal Center site grew to one million page views a month, an unheard of amount of web traffic in the day.

The Daytona Beach News-Journal landed in bankruptcy court due to a stockholders dispute. Experts at the bankruptcy trial estimated the News-Journal's worth at $110-120 million. It later sold for $20 million.

Can I use that estimate to guess that the Washington Post was then worth $1.2 billion?

Bezos got a bargain when he bought one of the most respected newspapers in the world.

He is described as a very patient innovator.

Even the revered Warren Buffett said Bezos made a good buy. In the past several years Buffett has purchased nearly 30 newspapers.