Details
by Emery Jeffreys
on 16 September 2015

Bezos said Tuesday that Blue Origin will fly its orbital launch vehicle from historic Launch Complex 36 in the next decade.

Cape Canaveral is home to many historic advances in manned space flight -- everything from the first flights of seven Mercury program astronauts to Neil Armstrong and Buzz Aldrin's stroll on the moon. 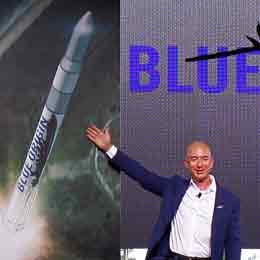 The announcement ignited excitement about the Space Coast’s comeback from roughly 8,000 contractor layoffs and the doldrums that accompanied NASA’s retirement of the space shuttle program in 2011.

It's also fueling hopes that a new era of lower-cost commercial spaceflight is close to taking off.

A repeated theme was the Space Coast’s comeback from roughly 8,000 contractor layoffs and the doldrums that accompanied NASA’s retirement of the space shuttle program in 2011, plus hopes that a new era of lower-cost commercial spaceflight is close to taking off.

Blue Origin is not the only company eyeing Kennedy Space Center and nearby Patrick Air Force Base.

Elon Musk's SpaceX has already launched several satellites into orbit for the U.S. Air Force. Musk's company has been experimenting with Falcon rockets in hopes the space vehicles can be reused. SpaceX has succeed in Air Force satellite launches.

It's also had some dramatic failures. Scientists destroyed one of Musk's rockets shortly after takeoff because of problems with a Cold War era rocket engine purchased from Russia.

SpaceX scientists have made another attempts to recover Falcon rockets n]by landing them on barges in the Atlantic Ocean with explosive failures. But those dramatic failures underscore the risks of space flight, something the experienced technicians along the Space Coast take in stride.

Blue Origin plans to employ 330 people and invest more than $200 million into launch and manufacturing facilities, assisted by at least $18 million in state and local incentives.

During its 43 years of service, 145 launches thundered into space from this site. The Mariner missions – the first U.S. spacecraft to visit other planets – lifted off from Complex 36. So did Pioneer 10, the first spacecraft to travel through the asteroid belt; Surveyor 1, the first U.S. spacecraft to land softly on the Moon; and multiple weather, communications and national defense payloads hopped their rides to space from LC-36. The site saw its last launch in 2005 and the pad has stood silent for more than 10 years – too long. We can’t wait to fix that.

It was the third announcement of new jobs in a month following announcements by aerospace firms Boeing and Embraer.