Details
by Emery Jeffreys
on 25 February 2011

The launch was nearly four months late Space Shuttle Discovery blasted off on its final mission to the International Space Station before it is retired next month.

The orbiter with a crew of six astronauts, streaked from the launchpad at Kennedy Space Center at 4:53 p.m. as tens of thousands of spectators cheered NASA's oldest and most-traveled shuttle.

The liftoff was the 39th for Discovery. Its 11-day mission will deliver supplies and a humanoid robot to the International Space Station.

Thursday's launch marks the beginning of the end of the space-shuttle program, 30 years after NASA began launching reusable shuttles. After Endeavour in April and Atlantis in June – NASA will have no manned-space rocket for the first time in 60 years.

NASA officials who have spent their careers in the shuttle program could be looking for jobs soon.

Discovery and its six-member crew are on a mission to deliver the Permanent Multipurpose Module, packed with supplies and critical spare parts, as well as Robonaut 2, the dexterous humanoid astronaut helper, to the International Space Station. Discovery is making its 39th mission and is scheduled to be retired following STS-133. This is the 133rd Space Shuttle Program mission and the 35th shuttle voyage to the space station.

The crew of space shuttle Discovery awoke at 6:54 a.m. EST to the song “Through Heaven's Eyes” by Brian Stokes Mitchell from the Prince of Egypt soundtrack, played for Mike Barratt at the request of his family.

Discovery will spend two days heading toward its rendezvous with the International Space Station. Friday, the crew will perform the standard scan of the shuttle’s thermal protection system using the orbiter boom sensor system attached to the end of Discovery’s robotic arm. 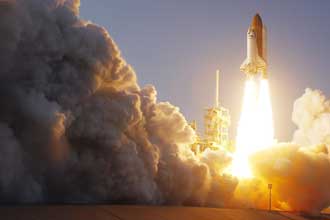 While the inspection is underway, the crew will work on prepare spacesuits onboard the shuttle that will be transferred to the station after docking and will be used during the mission’s two spacewalks.

Discovery was originally planned to lift off on Nov. 1. But a hydrogen leak, followed by the discovery of cracks in the insulating foam and some support rods on the fuel tank, caused a lengthy delay as NASA engineers labored to identify a cause and a fix.

The launch team nervously endured a delay of a little over three minutes by a computer glitch experienced by the U.S. Air Force Range Safety Office, which assures that the Atlantic Ocean downrange from KSC is clear of ship and airplane traffic.

The delay began when the countdown reached the five minute mark.

Lift-off occurred with seconds to spare before the launch window closed.