The ghosts of flights to the moon lurked unnoticed behind the scenes of the last flight of space shuttle Atlantis.

After 5,284,862 miles in space and two signature sonic booms, the shuttle dropped out of the darkness looming before dawn on the Kennedy Space Center runway, completing a long glide home from orbit.

The sun crept over the Atlantic horizon about a half hour later. By then ground crews were already working on the craft. It has one more trip. This time by land when it makes its final journey to Kennedy Space Center's visitors complex. 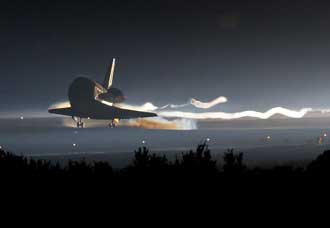 The final landing of Atlantis. NASA / Bill IngalisThe safe return of a shuttle and its crew from a dangerous journey in space is always a celebrated moment. The final flight of 135 missions during the past 30 years was bittersweet.

"Although we got to take the ride," said Commander Chris Ferguson on behalf of his crew, "we sure hope that everybody who has ever worked on, or touched, or looked at, or envied or admired a space shuttle was able to take just a little part of the journey with us."

The bittersweet lap of the journey is expected this week when the first of 8,000 workers get pink slips while NASA waits for the next program.

Layoffs begin this week with up to 4,000 dedicated men and women losing their jobs. Presumably many of them will find jobs with commercial space companies that are taking over manned space flight.

The Atlantis flight ended 42 years and one day after Neil Armstrong and Buzz Aldrin became the first men to walk on the moon on July 20, 1969. Both Armstrong and Aldrin were present for the launch of the last flight of Atlantis on July 8.

"This final shuttle flight marks the end of an era, but today, we recommit ourselves to continuing human spaceflight and taking the necessary - and difficult - steps to ensure America's leadership in human spaceflight for years to come," said NASA Administrator Charles Bolden.

Bolden, at the direction of President Barack Obama has led the dismantling NASA's manned space flight programs. Obama cancelled the Constellation program because it was too expensive.

No schedule has been set for the next manned space flights. U.S. astronauts will travel to the International Space Station at a cost of $16 million per person.

The glimpses of previous moon adventures emerged during the last mission during wake up calls, a NASA tradition of waking the crew with music.

On Day 6, Sir Elton John's "Rocket Man" woke the crew with his personal greeting. The singer thanked those in the shuttle program for 30 years of dedication. It marked the fifth flight it was used for for a wakeup call. Astronauts heard the song on a number of flights to the moon.

Just after the song, a mission controller at Johnson Space Center in Houston remarked to the crew about the last flight and the future.

"It's great to be with you another day," she said.

Michael Stipe of the group R.E.M. sang "Man On The Moon" on Day 7. Stipe told the astronauts he wrote the song for NASA when he was in Venice. Venice is where astronomer Galileo presented the Venetian government with the first telescope in 1610.

On the last day of the flight, the astronauts heard an arrangement of Revile, gunfire and Irving Berlin's "This is the Army Mr. Jones."

Since STS-1 launched on April 12, 1981, 355 people from 16 countries flew 852 times aboard the shuttle. The five shuttles traveled more than 542 million miles and hosted more than 2,000 experiments in the fields of Earth, astronomy, biological and materials sciences.

The shuttles docked with two space stations, the Russian Mir and the International Space Station.