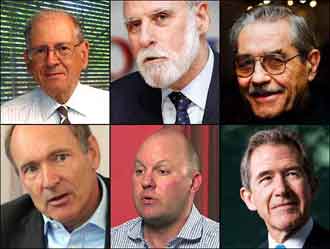 LONDON -- It's now cool to be an Internet geek. Queen Elizabeth has proclaimed it so by bestowing inaugural honors on five engineers who helped invent the Internet.

The Internet has connected the world and brought to the fingertips of two billion people almost the entire span of human learning.

Engineers Robert Kahn, Vinton Cerf, Louis Pouzin, Tim Berners-Lee and Marc Andreessen were today announced as the winners by Lord Browne of Madingley in the presence of the queen and members of the Royal Academy of Engineering, which administers the 1 million, about $1.5 million U.S. dollars prize.

"Since we turned this system on Jan 1, 1983, 30 years ago, it has exploded in terms of its applications, said Vinton Cerf. He accepted the honor during an Internet teleconference

"This is like waking up from a really exciting dream and discovering that the geeks are winning," Cerf said.

Cerf and Kahn were influenced by the engineering behind Pouzin's datagram as Kahn and Cerf invented the transmission control protocol/internet protocol, the underlying framework that routes packets of data around the world. Without TCP/IP, the Internet could not function.

Andreesen, while a student at the University of Illinois, invented the first web browser while he worked at the university's National Center for Supercomputing Applications. The browser, Mosaic, integrated text and graphics that would work on a wide range of computers.

"All great engineering feats are about team work," said Lord Browne. "The invented the Internet, the World Wide Web and the browser."

The Internet was the top secret child of the U.S. Defense Department's Advanced Research Projects Agency.

Like many of the technologies we take for granted daily, the Internet was intended to be a military tool. Computers were first developed to calculate trajectory for artillery. The Global Positioning System is a satellite navigation system developed for the military. The core of of GPS is still controlled by the U.S. Air Force.

Much doom and gloom has been predicted for the Internet. Foreign governments want to censor it. Commercial interests want to exert great control over what Internet users can and cannot do with it.

It may even become a cyber battlefield as one nations hacks the networks of another.

The U.S. government wants to use it to snoop on the activities of U.S. citizens. Big data companies uses it to amass huge amounts of data on citizens prompting many privacy concerns.

Another Internet pioneer, Danny Hillis, has predicted that it will eventually collapse and Plan B is need to for its survival

Cerf said the ubiquity of the Internet will save it from itself. The Internet's constant evolution and movement into every corner of our lives will insulate it from dozens threats.

Today's "anything goes" attitude is almost like america's wild west. Maybe its the last frontier.

Today a third of the world's population use the Internet and it is estimated to carry around 330 Petabytes of data per year, enough to transfer every character ever written in every book ever published 20 times over, the Royal Academy of Engineering said.