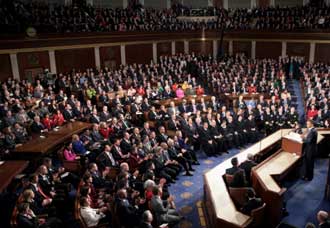 News analysts of President Barak Obama's State of the Union speech are divided in two camps.

One camp urged an immediate end to the partisan bickering that gridlocks Congress at a time when citizens can't afford it.

The other observers said Obama made the correct judgment by making technology the center of the reconstruction of the battered and bruised U.S. economy.

A CBS News poll said that more than 90 percent of those Americans polled approved of the speech.

However, members of Congress saw it in many other ways. Some observers wonder if they actually listened to the leader of the free world.

Republican leaders claim the November elections amounted to an endorsement of massive budget cuts. Apparently they didn't get the memo. Voters were lashing out about the constant bickering and gridlock.

The government has enormous debt that must be brought under control, yet the financial woes brought on by George W. Bush's administration have crushed the economy with record unemployment.

{sidebar id=5}Obama wants to use business as the engine to rebuild the economy much like John F. Kennedy wanted to beat the Russian space program.

President Ronald Reagan used the defense industry to spend the Russians into financial oblivion without firing a shot.

At one point, Obama harangued Congress for letting China and India make competitive gains against the U.S. in technology innovation.

In an eyebrow-raising point, Obama said that America had reached its “Sputnik moment,” referring to the Soviet satellite whose 1957 launch embarrassed the U.S. and eventually spurred President Kennedy's to vow to beat the Soviets to the moon.

A vow the nation met, but Kennedy didn't live to see.

“Two years ago, I said that we needed to reach a level of research and development we haven’t seen since the height of the Space Race,” Obama said. “We’ll invest in biomedical research, information technology, and especially clean energy technology, an investment that will strengthen our security, protect our planet, and create countless new jobs for our people.”

{sidebar id=6}Time after time during the speech he cited instances of innovation by small American companies that created jobs and money.

"We do big things," Obama said.

"From the earliest days of our founding, America has been the story of ordinary people who dare to dream That’s how we win the future.

"We’re a nation that says, 'I might not have a lot of money, but I have this great idea for a new company. I might not come from a family of college graduates, but I will be the first to get my degree. I might not know those people in trouble, but I think I can help them, and I need to try. I’m not sure how we’ll reach that better place beyond the horizon, but I know we’ll get there I know we will.”

"We do big things," he repeated to make his point.

"The idea of America endures Our destiny remains our choice And tonight, more than two centuries later, it’s because of our people that our future is hopeful, our journey goes forward, and the state of our union is strong," the president said. 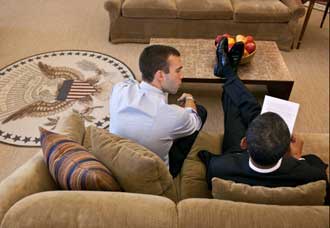 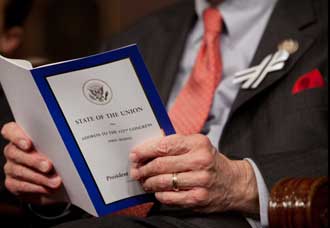