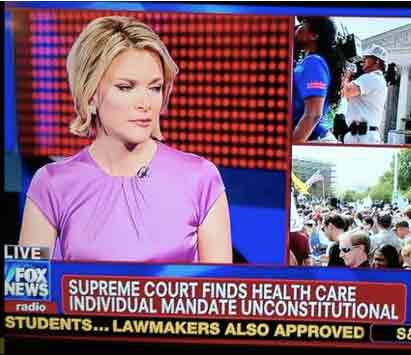 When the ruling was handed down by Chief Justice John Roberts, there were two decisions. The nation's highest court upheld the law. Within minutes, news consumers ruled that CNN and Fox News had botched reporting the event.

Both CNN and Fox News both declared that the supreme court scuttled the two-year-old federal law while most experts were still reading the 117-page opinion.

CNN first reported in a banner on its website: "The Supreme Court has struck down the individual mandate for health care."

Within minutes after the decision was announced, CNN was hitting the airwaves with four different versions of what the ruling said, the Baltimore Sun reported.

First, the network reported the justices had killed the individual mandate provision of the law -- perhaps its most controversial aspect.

Then, CNN reported the law "may have been upheld."

CNN switched its story once again, saying the individual mandate was "partly upheld, partly struck down."

Finally, 15 minutes after the ruling was announced, the network settled on what everyone else was reporting: That President Barack Obama's landmark health care law had been upheld.

In addition to hitting the airwaves, the network also sent out two breaking news alerts.

CNN's On-air legal analyst Jeffrey Toobin, jumped to the network's defense. He said the mistake was embarrassing but covering breaking news can get very stressful.

The Business Insider reported there was a near mutiny in the CNN newsroom.

In classic fashion, Fox brushed aside the issue within two minutes:

By contrast, one other cable network was unable to get their Supreme Court reporter to the camera, and said as much. Another said it was a big setback for the President. Fox reported the facts, as they came in.

The first Persian Gulf War quickly unfolded while the U.S. Army marched across Kuwait to the border of Iraq. Based on what other networks, newspapers and the U.S. Department of Defense said, Fox reporters may have been covering another conflict.

The other networks quickly reported their own errors in an effort to the get the historic event reported correctly. Fox just marched on reporting new information.

Thursday gaffe by CNN and Fox News will soon be compared to the Chicago Tribune's "DEWEY DEFEATS TRUMAN" headline during the 1948 election.

That error was probably more wishful thinking than an error. A Tribune editorial once labeled Truman a nincompoop, another word for idiot, a legal term for people with an IQ below 30.

Truman had a similar opinion of the conservative Tribune.

An early press deadline forced the first post-election issue of the Tribune to go to press before East coast states had reported many results from polling places.

The paper relied on its veteran Washington correspondent and political analyst Arthur Sears Henning, who had predicted the winner in four out of five presidential contests in the past 20 years.

The United Press International photo is often used to tell the story.

UPI White House correspondent Merriman Smith struggled with a reporter from the AP over who would use a phone at Parkland Hospital in Dallas the day John F. Kennedy was assassinated. The two men did not come to blows, but the incident is omitted from the AP's history of the Kennedy assassination. 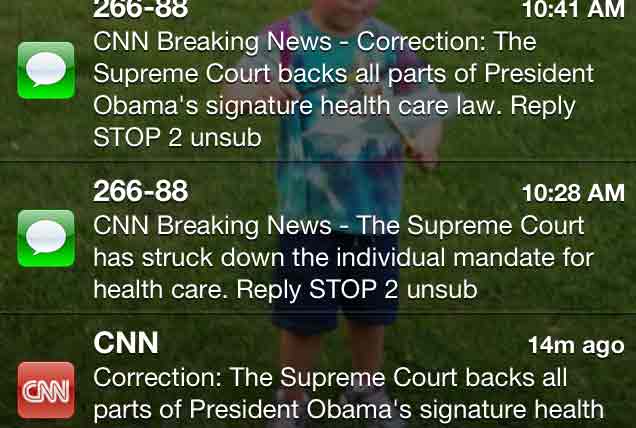 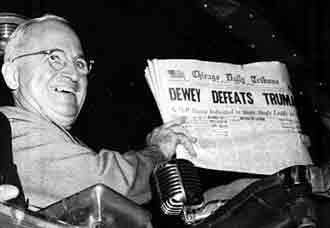