I read it on the Internet.

That could be used as a reason to prove a contentious fact. More often it is an excuse. I've uttered that damnable phrase myself. 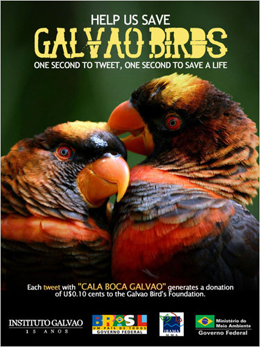 With three short words used as a commentary about Carlos Eduardo dos Santos Galvão Bueno, a great escapade evolved in less than a day.

Millions had no clue of what the three words meant.

Some ispired Brazilians began to offer elaborate and fictional explanations, the most popular of which was that the phrase actually means "Save the Galvão," a supposedly endangered species of parrot that can only be saved by a Twitter campaign.

On Sunday, a hoax video was uploaded on YouTube imploring the world to help save the Galvão birds from extinction -- by "retweeting" the phrase "Cala Boca Galvão" on Twitter, which supposedly resulted in a donation of 10 cents towards the conservation of these parrots. On the other hand, the campaign seems to be working -- the video has been watched more than 200,000 times and not one Galvão has died:

Vint Cerf and Bob Metcalfe, if they were dead, would be churning in their graves.

Next we'll see Sally Struthers begging for money to support a Galvao in the rainforest.