Details
by Emery Jeffreys
on 04 February 2016

WEST PALM BEACH, Fla. — The small exclusive fraternity of astronauts that walked on the moon grew even smaller with the death of Edgar Mitchell on Feb 4., the eve of the 45th anniversary of his flight to the moon. He was 85.

On Apollo's third lunar mission Shepard and Mitchell traveled the moon surface to deploy scientific instruments, perform a communications test on the surface, and photograph the lunar surface and any deep space phenomena.

It was a mission of first and lasts. It was Mitchell’s only spaceflight. Shepard was the first American in space and it was his last flight. It was the first mission to broadcast color television signals to earth.

Mitchell spent 9 hours and 23 minutes on surface around the moon's Fra Mauro highlands.  He was the sixth person to walk on the moon.

Shepard and Mitchell stayed on the moon longer than any other crew -- a total of 33 hours.

"As a member of the Apollo 14 crew, Edgar is one of only 12 men to walk on the moon and he helped to change how we view our place in the universe," said Charles Bolden, NASA administrator, himself an astronaut on the space shuttle.

CNN reported that Mitchell was fascinated and frustrated by the relationship between religion and science, he was very public about seeking links between the known and unknown.

A year after Apollo 14, in 1972, he left NASA to embark on a mission of the study of extraterrestrial life in the universe.

In one interview, he told Bloomberg Business that the 1947 Roswell incident, which to some people is evidence of an extraterrestrial crash landing, was covered up. (The U.S. government has said the incident involved the crash of a high-altitude balloon.)

Bolden said "Edgar spoke poetically about seeing our home planet from the moon saying: 'Suddenly, from behind the rim of the moon, in long, slow-motion moments of immense majesty, there emerges a sparkling blue and white jewel, a light, delicate sky-blue sphere laced with slowly swirling veils of white, rising gradually like a small pearl in a thick sea of black mystery. It takes more than a moment to fully realize this is Earth …'
Bolden said Mitchell was drawn by President Kennedy's call to send humans to the moon.

"He is one of the pioneers in space exploration on whose shoulders we now stand," Bolden said.

The U.S. has no planned or scheduled flights to the moon.

Experts say a moon colony presents an enormous value to manned spaceflight to Mars. Companies like SpaceX and Blue Horizon have their eyes set on lunar adventures but no plans have been announced. China and India both claim to have aspirations of lunar missions.

In 2010, Neil Armstrong made a rare public criticism of President Barack Obama's decision to cancel the Ares 1 launch vehicle and the Constellation moon landing program. He was joined by Apollo veterans Jim Lovell and Gene Cernan. 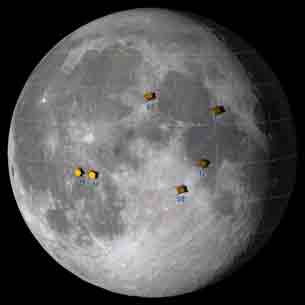