Details
by Emery Jeffreys
on 11 October 2012 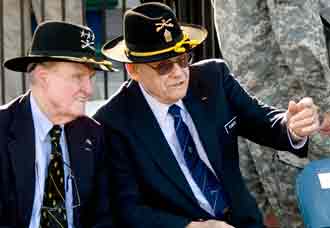 He died just before dawn, 0400 in infantry speak.

Prior to the filming of We Were Soliders in 2002, few people beyond the military establishment knew of Plumley's legendary heroism. The West Virginia native and son of a coal miner never sought the spotlight for doing what he believed to be his job.

Plumley did not read from the script in 1965, he lived second by second during a three-day battle that began with an ambush by the National Vietnam Army.

During an interview on National Public Radio, Joe Galloway, then a correspondent with United Press International, described an incident from the battle portrayed by Elliot as Plumley and actor Barry Pepper as Galloway.

He declined to accept it because as a reporter he was a non-combatant.

"Ain't no such thng today, sonny," the gravelly-voiced Elliot replied.

At that moment Galloway said he learned that command sergeants major never made mistakes.

Galloway was the recipient of the Bronze Star for valor for carrying wounded soldiers to safety. He was the only civilian to receive such an honor during the Vietnam war.

The soldiers were honored with three Medals of Honor and two Distinguished Service Crosses.

In the book "We Were Soldiers Once...And Young," written by Galloway and Morre, Moore said there were too many awards.

"We had problems on the awards... Too many men had died bravely and heroically, while the men who had witnessed their deeds had also been killed... Acts of valor that, on other fields, on other days, would have been rewarded with the Medal of Honor or Distinguished Service Cross or a Silver Star were recognized only with a telegram saying, 'The Secretary of the Army regrets...'