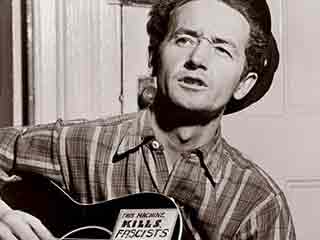 Folk singer Woodrow Wilson Guthrie would have been 100 years old on Saturday. The troubadour wrote "This Land Is Your Land," and thousands of other songs.

He spent most of his life singing about America. Many of his songs were shaped by the experiences of an 18-year-old Guthrie growing up in Okalahoma's Dust Bowl of the 1930s.

The Dust Bowl intensified the one-two punch delivered by the Great Depression. Unemployment hovered near 25 percent while 2.5 million people were displaced by the biggest natural catastrophic event in 350 years.

Guthrie experienced a rough, poor and wild life. Like 200,000 of his plains neighbors, he tried to make a new life in California.

Guthrie's song, "I Ain't Got No Home in This World Anymore," describes the family's plight:

"The further we get away from Woody's birth and death, and take a look at his influence, [the more] it helps us learn about ourselves as Americans," Klein said an an interview National Public Radio. "There's a wild-ass quality to this country that he personified. I go around the country. The greatest fear is that we're losing that — we're losing our creativity, our individualism. Woody was an individual, and a militantly individual individual."

Guthrie never forgot his struggles nor the battles of workers.

"I am out to sing songs that will prove to you that this is your world and that if it has hit you pretty hard and knocked you for a dozen loops, no matter what color, what size you are, how you are built, I am out to sing the songs that make you take pride in yourself and in your work," The singer said. "And the songs that I sing are made up for the most part by all sorts of folks just about like you."

He also made light of his skill as a guitar player.

"If you play more than two chords, you're showing off," Guthrie said.

Guthrie discovered his voice as a supporter of farmworkers and union movements. His sympathies were always with the poor and the powerless. His politics were far to the left.

"Left wing, chicken wing, it don't make no difference to me," he said.

His legendary Gibson guitar bore the legend "This machine fights fascists" gouged into the instrument's wood. The phrase was often scrawled on the side of war planes fighting fascists during the Spanish Civil War.

Fighting injustice and powerlessness of displaced people is found in many of his songs. He also seemed to love Robin Hood ways of famous bank robbers like John Dillinger and Floyd Mayweather Jr., also known as Pretty Boy Floyd.

Read the Ballad Of Pretty Boy Floyd on bytewriter.com

Yes, as through this world I've wandered
I've seen lots of funny men;
Some will rob you with a six-gun,
And some with a fountain pen.

Both Dillinger and Mayweather died in a hail of gun fire with lawmen.

Guthrie died in 1967 after a tragic struggle with Huntington's Disease.