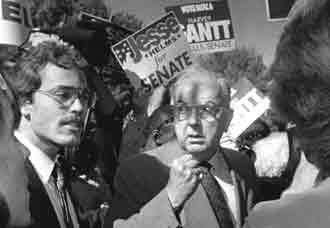 The former U.S. Senator from Raleigh, N.C. was many things to many people. Helms, like presidents Thomas Jefferson and John Adams, died on the Fourth of July. He was 86.

If Helms was involved in a controversy, sparks flew like a pickaxe striking a diamond.

He had not served in the U.S. Senate since 2003. He was succeeded by Elizabeth Dole, former chairman of the American Red Cross and wife of Sen. Bob Dole. She had impeccable credentials to be a U.S. Senator and to be Helms heir apparent.

Helms had been a fixture in North Carolina politics since 1950. He was a fixture on WRAL-TV spouting his brand of conservatism frequently pushing the envelope in a state that still harbored Jim Crow segregationist views.

One of my strangest experiences as a reporter took place while Jesse Helms waged a political war against Charlotte Mayor Harvey Gantt.

Gantt was a well-spoken man, a product of the new south and represented nearly everything Helms was against. Gantt was also black, a target for Helms vitriol.

Months before the primary, a gay activist held a one-man sit-in at Helm's campagin office in Raleigh. He protested Helms's bitter, bitter opposition to federal funding for AIDS research. It was a simple protest in the parking lot of a non-descript office building.

In an election year, it drew the working press like killer sharks drawn to chum.

Helms approached the building with the lone protestor. Instead of a confrontation with the protestor, it turned out to be a near brawl between Helms and news crews. Helms drew a fist and seemed poised to punch a reporter he believed shoved him.

It was documented by a reporter with his own crew who claimed to be from Channel 9. There was one problem. Channel 9 didn't send a crew to the altercation.

The crew was filming the event in case "something" happened, Helms operatives later admitted. They were expecting a confrontation from the lone protestor. He was nowhere near the skirmish of reporters jostling for position in case there was a provacative event with the gay protestor.

United Press International made history after the primary by calling the lopsided Democratic race in favor of Gantt, hours ahead of the Associated Press. That's a story in itself. The decision to call the race was based on a simple Excel spreadsheet on my personal computer. that's back when PCs were few, far between and expensive.

Harvey Gantt tried twice to beat U.S. Sen. Jesse Helms. The first black student at Clemson University, he became an architect in Charlotte and served on the city council from 1974 to 1983. He became the city's first black mayor in 1983, serving two terms until 1987. He ran unsuccessfully against Helms in 1990 and 1996.

Helms earned the Senator No moniker with this quote in 1959:

"Compromise, hell! That's what has happened to us all down the line - and that is the very cause of our woes. If freedom is right and tyranny is wrong, why should those who believe in freedom treat it as if it were a roll of bologna to be bartered a slice at a time?"