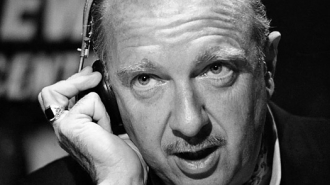 Much of the nation recognized his job at CBS News with his death Friday. He was 92 and was recognized as the reporter's reporter.

His death came just four days short of the 40th anniversary of one of mankind's greatest adventures -- Astronauts Neil Armstrong and Buzz Aldrin's walk on the moon.

Armstrong became the first human to set foot on the lunar surface, realizing humanity's age-old dream, to walk on the moon.

At 4:18 p.m. EDT, July 21, 1969, the lunar module Eagle touched down in the soft lunar dust. It would be six and a half hours before Armstrong and Aldrin would emerge from the craft.

Armstrong uttered those famous words: "That's one small step for man, one giant leap for mankind."

It was a giddy experience for Americans. It was such a breath-taking experience that anchorman Cronkite could only say, "Oh, wow!"

Nobody seemed to notice that the man who held the nation's hand throught tragedy and triumph was at a loss for words. Just six years earlier, Cronkite was the first to tell us President John F. Kennedy had been gunned down in Dallas.

Kennedy, the man who issued the challenge to get to the moon before 1970, never lived to see it. Americans just had to make that that goal. Failure would have permanently stained the national psyche.

The moon landing was part of a giddy time for me. I had just graduated from high school. I had never ventured more than a couple of hundred miles from the coalfields of southern West Virginia.

I spent that summer working at Philmont Scout Ranch as a photographer amid the beauty of New Mexico's Sangre de Cristo mountains.

On my adventure it seemed fitting that I see mankind's newest and greatest adventure. It was easier said than done.

I wasn't within 20 miles of a TV during the live broadcast when Aldrin and Armstrong completed their feat of daring. Because we couldn't make the live shot, a co-worker and I hiked 20 miles through the Sangre de Cristo Mountains to watch the evening news at camp headquarters near Cimarron.

We pressed into the crowded dining hall to watch Armstrong on the moon via a battered and loud black and white console TV. The snowy image on the tube wasn't as good as the images shown later. We didn't care because we were seeing history.

Not one word was uttered by anyone watching. Nobody wanted to break the spell created by the walk. Neil Armstrong's words seemed very humble.

The event really put my little adventure into perspective. It paled in comparison to the adventurers risking their lives. The explorers traveled hundreds of thousands of miles. I merely flew across the country on an airliner.

I didn't mind a bit. They were our heroes. They are still my heroes.

The real disappointment comes when you realize that we haven't attempted anything that comes close to walking on the moon.

What's next? Has the nation founded by explorers and adventurers lost it's sense of adventure? We're the only ones who can answer that question.