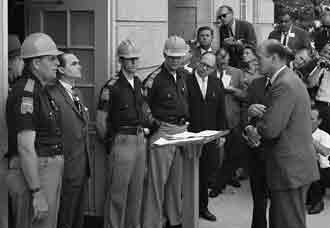 Former U.S. Attorney General Nicholas Katzenbach, who stood toe-to-toe against Alabama segregationists, has died. He was 90.

Six short years in government put him in the thick of major events of the ’60s.

On June 11, 1963, he confronted Gov. George C. Wallace on the steps of the University of Alabama in Tuscaloosa. Wallace trumpeted “segregation now, segregation tomorrow, segregation forever” and vowed to block the admission of two black students “at the schoolhouse door.”

Flanked by a federal marshal and a U.S. attorney, Katzenbach approached Foster Auditorium, the main building on campus, around 11 a.m. Mr. Wallace was waiting in stifling heat.

Wallace vowed to use the Alabama National Guard to block the students.

Mr. Katzenbach read a presidential proclamation putting the National Guard in federal service and ordered that the students be admitted. He asked Wallace to step aside peacefully.

About four hours later, with the acquiescence of the governor, Mr. Katzenbach escorted the students to register.

Katzenbach was known for reconciling differences and cooling tempers. He defused the situation by leaving the aspiring black students, Vivian Malone and James Hood, in a car while he confronted Wallace.

It was not his first brush with danger, nor was it his first experience with racial segregation.

At age 19, he enlisted in the Army Air Corps as navigator. His B-25 bomber was shot down in 1943, and he spent two years as a prisoner of war in Italy and Germany including the infamous Stalag Luft III.

Katzenbach played a small role in a prison tunnel escape of 73 men on March 24-25, 1944 that was immortalized in the motion picture "The Great Escape." Fifty of the prisoners were executed at the order of Adolph Hitler.

During his time as a POW he was interned with pilots and air crews of the 332nd Fighter group. Following an incident, Katzenbach demanded that the black airmen must be treated the same way as any other airman.