Details
by Emery Jeffreys
on 07 October 2011 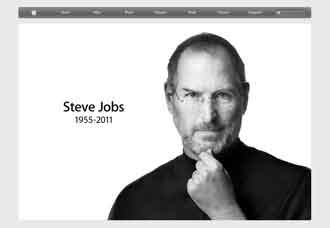 Technology icon Steve Jobs died Wednesday after a long battle with cancer. He was 56.

Jobs helped found Apple Inc. in the 1970s with Steve Wozniak and angel investor Mike Markkula in a garage on the edge of California's Silicon Valley. They designed, developed and marketed the first successful personal computer.

"We've lost something we won't get back," Wozniak told The Associated Press following Jobs' death. "The way I see it, though, the way people love products he put so much into creating means he brought a lot of life to the world."

The passionate innovator is described as the modern Leonardo DaVinci. Some consider his greatest contribution to be evolution of industrial design.

"He made a pretty bad company into a very good profitable company," said Walt Mossberg, technology editor of the Wall Street Journal.

Jobs was fired after a board room coup in 1985 He had a long running dispute with CEO John Sculley, a man Jobs recruited from PepsiCo as CEO.

Starting at the bottom again, Jobs led a number of computer ventures including NeXT computer and Pixar, the animation studio that produced a string of movies including blockbuster Toy Story.

In 1996 Jobs returned to Apple when the company bought NeXT for $496 million.

Under Jobs tutelage, the company released innovative products like the iPod, the iTunes music store, the touch interface iPhone and iPad.

When Job stepped down as chairman in August, the company had amassed more cash than the U.S. government.

Wozniak sold his prized Hewlett-Packard scientific calculator for $250. Jobs sold his VW bus for $1,500 to start the company.

Already a millionaire from his work at National Semiconductor, Markkula provided an $80,000 equity investment and a $170,000 loan. He also provided "adult supervision" for Jobs and Wozniak.

According to the Globe and Mail of London, when the company went public in 1980, Jobs owned $21 million is shares at 1980 prices, about $57 million in today's dollars.

Since 1980 Apple has done three two-for-one stock splits, turning that $22 IPO price into a split adjusted price of $2.75. Assuming Jobs would have had 78,909,091 shares of Apple. At a $400 share price today, Steve Jobs would be worth about $31.6 billion if he held all of his initial shares versus an estimated $2.2 billion in Apple stock today.

A real life scenario changed that computation. When Jobs was ousted from Apple in 1985 he sold all but one share so he could still get the annual report.

In 1986, Jobs paid $5 million for Pixar which was later sold to Disney bringing his net worth to $8.3 billion.

Had he kept the Apple stock, he would have a net worth of $36 billion making him No. 5 on the Forbes billionaire list instead of No. 110 today, said Tim Parker of investopedia.com

Money was not Jobs key motivator.

"I am still learning Lessons from Steve Jobs," said Sculley, the man who fired him.

Jobs explained his motivations during a 2005 commencement speech at Stanford University. It was the closest the college dropout ever came to a graduation ceremony.

"I'm pretty sure none of this would have happened if I hadn't been fired from Apple. It was awful tasting medicine, but I guess the patient needed it. Sometimes life hits you in the head with a brick. Don't lose faith. I'm convinced that the only thing that kept me going was that I loved what I did. You've got to find what you love. And that is as true for your work as it is for your lovers. Your work is going to fill a large part of your life, and the only way to be truly satisfied is to do what you believe is great work. And the only way to do great work is to love what you do. If you haven't found it yet, keep looking. Don't settle. As with all matters of the heart, you'll know when you find it. And, like any great relationship, it just gets better and better as the years roll on. So keep looking until you find it. Don't settle."

His biggest motivator was death.

"I read a quote that went something like: 'If you live each day as if it was your last, someday you'll most certainly be right.' It made an impression on me, and since then, for the past 33 years, I have looked in the mirror every morning and asked myself: 'If today were the last day of my life, would I want to do what I am about to do today?' And whenever the answer has been 'No' for too many days in a row, I know I need to change something.

"Remembering that I'll be dead soon is the most important tool I've ever encountered to help me make the big choices in life. Because almost everything all external expectations, all pride, all fear of embarrassment or failure - these things just fall away in the face of death, leaving only what is truly important. Remembering that you are going to die is the best way I know to avoid the trap of thinking you have something to lose. You are already naked. There is no reason not to follow your heart."

At the time, Jobs was battling what doctors believed was incurable pancreatic cancer.

"No one wants to die. Even people who want to go to heaven don't want to die to get there. And yet death is the destination we all share. No one has ever escaped it. And that is as it should be, because death is very likely the single best invention of Life. It is life's change agent. It clears out the old to make way for the new."

Wozniak ended permanent work at Apple in 1987. He is still considered an employee and is a shareholder. He is the sole inventor on four U.S. patents. All four are crucial functions in modern computers.

Markkula was employee No. 3 and the second CEO of Apple Computer Inc.

In 1985 Markkula took John Sculley's side in a dispute with Jobs that ended with Jobs dismissal. In 1993 he helped force Sculley out.

Sculley's ouster came three years before Jobs returned to the company. Since then he has resigned from two companies and been involved in the bankruptcies of two others. 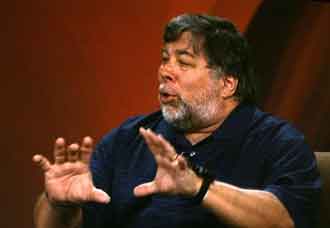 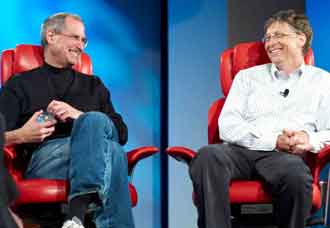 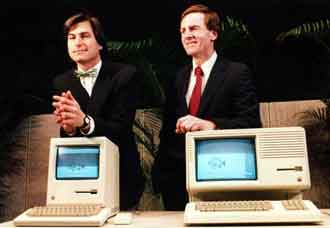 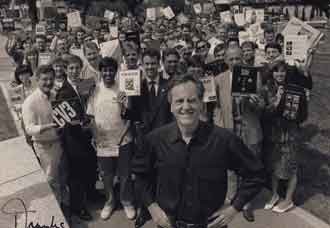