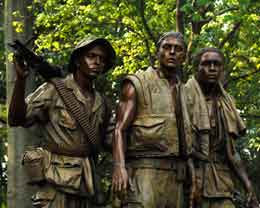 Veterans of World War II, America's greatest generation, are dying at the rate of more than 1,000 per day.

Veterans Day is Thursday. Each year there will be fewer and fewer opportunities to remember and honor the men and women for service to their country in World War II, the Korean War and the war in Vietnam.

There is one remaining U.S. veteran of World War I, Frances Woodruff Bucklers, 109, of Charlestown, W. Va.

A total of 2.7 million fought in the war that never ended, the Korean War. No surrender was ever declared. Armed U.S. soldiers with weapons ready have been staring across a narrow no-man's land to North Korea since the cease-fire in 1953.

A generation of 7.6 million soldiers fought in Vietnam, one of the nation's most unpopular wars. They are fading at a rate of 300 per day. Their average age is 64.

Despite the dwindling numbers of older vets, their numbers reflect a significant part of American life.

Veterans Day originated as "Armistice Day" on Nov. 11, 1919, the first anniversary of the end of World War I. Nov. 11 became a national holiday beginning in 1938.

There were other moments of remembrance. September 2 was set aside for V-J Day, the day Japan's emperor signed a surrender documents in 1945.

May 8, 1945 was the day unconditional surrender was accepted from Nazi Germany.

President Dwight D. Eisenhower signed legislation in 1954 to change the name to Veterans Day as a way to honor those who served in all American wars.

The day honors living military veterans with parades and speeches across the nation.

A national ceremony led by the Old Guard takes place at the Tomb of the Unknowns at Arlington National Cemetery in Virginia.

The silent sentinels, all volunteers, have served at the tomb 24 hours a day, 7 days a week since July 2, 1932

Members do not wear rank on their uniforms to avoid outranking the unknowns, whatever their rank may have been.

During the time they are posted at the tomb, each one walks a silent cadence of 21 steps - a perpetual 21-gun salute.