Rand Paul's Mr. Smith Goes To Washington moment during his U.S. Senate filibuster was a big scam in more ways than a politician can count votes or money. 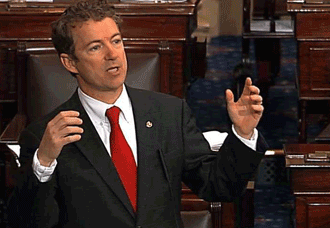 Paul spent 13 hours on the senate floor ranting about a nonexitent dispute: whether the Obama administration believed they could use drones or other weapons to kill American citizens wihtout due process.

Paul didn't actually speak for 13 hours. He tallied only 8 hours and 2 minutes. The rest of that time was filled up by 16 of his senate colleagues including two Democrats.

First, Sen Paul, R-Ky., tried to convince his followers that his 13-hour tirade On Wednesday against Attorney General Eric Holder and President Obama was spontaneous.

The National Journal reports that Paul began planning his move to block the nomination for CIA director 11 days before the incident. He floated the plan over dinner with one Sen. Mitch McConnell's top strategists.

Then McConnell put out the word to GOP senators that he supported Paul's plan to filibuster John Brennan's appointment as director of the CIA over the U.S. drone policy.

The filibuster smacked of naked politics in a number of ways.

Paul didn't force a change in U.S. policy. Instead, The Kentucky senator twisted the facts from a letter written by Attorney General Eric Holder. Paul said the AG would allow drone strikes on U.S. citizens.

Holder's first letter told Paul that a drone attack would not be permitted on U.S. soil.

In his first letter to Paul, Holder noted the obvious: If the United States were under attack from within, the president might have to order the use of lethal military force within the territory of the United States. This is how Holder put it:

[T]he US government has not carried out drone strikes in the United States and has no intention of doing so. As a policy matter moreover, we reject the use of military force where well-established law enforcement authorities in this country provide the best means for incapacitating a terrorist threat…The question you have posed is therefore entirely hypothetical, unlikely to occur, and one we hope no president will ever have to confront. It is possible, I suppose, to imagine an extraordinary circumstance in which it would be necessary and appropriate under the Constitution and applicable laws of the United States for the President to authorize the military to use lethal force within the territory of the United States. For example, the president could conceivably have no choice but to authorize the military to use such force if necessary to protect the homeland in the circumstances like a catastrophic attack like the ones suffered on December 7, 1941, and September 11, 2001.

It has come to my attention that you have now asked an additional question: "Does the President have the authority to use a weaponized drone to kill an American not engaged in combat on American soil?" The answer to that question is no.

Paul interpreted The AG's second letter as a victory. In fact the facts did not change.

Then Paul sent out a fund raising letter:


My 13-hour filibuster yesterday is being called one of the longest in U.S. history.

I had been trying for more than a week to get a straight answer on whether or not the Obama administration believed it had the authority to use drones to target and kill American citizens on American soil – without due process.

And after receiving a letter from Attorney General Eric Holder claiming they DO have that authority, I could no longer sit silently at my desk in the U.S. Senate.

So I stood for thirteen-straight hours to send a message to the Obama administration, I will do everything in my power to fight their attempts to ignore the Constitution!

Millions of Americans chose to stand with me and put President Obama, Attorney General Holder, and Congress in the spotlight . . .

And the good news is, it worked!

Just hours ago, I received a letter from Attorney General Holder declaring the President DOES NOT have the authority to use drones to kill Americans on U.S. soil.

Patriot, this shows what we can do when stand together and fight.

So won’t you help me continue the fight to protect our Constitutional liberties today.