The 33 votes in the U.S. House of Representatives to repeal the National Affordable Care Act may show determination by house Republicans to gridlock Congress, but it was 32 times too many. 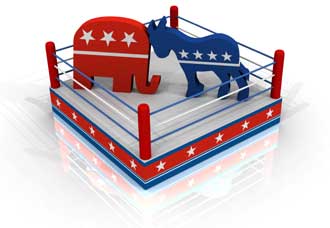 A radio report by Marketplace.org and data supplied by the non-partisan Congressional Research Service reveal that it probably cost taxpayers as much $56,714,361 to make that political statement.

It left many Americans wondering why the House of Representatives can't deal with creating jobs, stopping Wall Street thieves and resolving their own incompetence.

Marketplace calculated the cost of a vote by totaling the annual salary of 435 House members. Add that to the total amount of annual allocations each congressional office receives. That figure is divided by 366 days in 2012 to determine the total cost per day.

"Congress has become almost a joke," said Thomas Mann, a researcher at the Brookings Institution. Lest you wonder about the politics of Mann's statement, the organization has been labeled both liberal and conservative depending on whose ox was gored by one of their white papers.

But wait a minute, the Democrats voted in favor of NOT repealing the National Affordable Care Act.

The Democrats could be labeled just as guilty of waste as the Republicans because there were no efforts to block repetitive votes.

I believe members of Congress each should be forced to return $126,426.99 to government coffers. And they should be forced to sign a pledge to solve the problems of the economy, jobs, health care, Social Security and imigration by the end of 2012 or resign in disgrace.

If GOP lobbyist Grover Norquist can force Republican members of congress to sign pledges to refuse to raise taxes for any reason, why can't American voters exact a pledge from congress to do their jobs wihtout being bought off by big business?

Cloture is the term describing an effort to stop debate. In the House of Representatives it takes a simple majority. In the U.S. Senate, it's a three-fifths majority.

It's a mongrelization of the French word clôture for ending or conclusion. It is sometimes associated with the excesses of French revolutionaries who used the guillotine to bring closure.

The parliamentary English version of cloture cuts off debate.

A cloture vote on any of the 32 repeal votes is unlikely. But it gives citizens an idea of the gridlock in Washington that continues to contribute, not solve, the nation's problems.

The measure stands no chance of passage in the U.S. Senate, and if it did, President Obama would veto any measure to repeal it.

Presidents have issued 2,564 vetoes since George Washington took office in 1789. The founding fathers considered it an important part of the checks and balances built into the Constitution.

That check and balance works very well. Presidential vetoes have been overridden by Congress a total of 110 times in the history of the nation.

The latest vote on July 11, comes about a week after the U.S. Supreme Court upheld key parts of the Affordable Care Act.

Many members of the congress have vowed to overturn the act. Repeals of laws upheld by the U.S. Supreme Court are few and far between -- about 10 times since this famous Republic began.

We need jobs and a strong economy, not posturing for big political donors.

Emery Jeffreys is a registered voter in Florida. He is ashamed to be affiliated with any U.S. party.