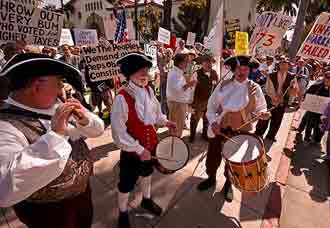 Tea Party demonstration in California. Neoozhawk / Michelle Wongbbyists and Republican front groups have driven the Tea Party to push for giveaways to oil companies and big businesses. ThinkProgress is a liberal blog sponsored by the Center for American Progress.

The Occupy Wall Street demonstrations picking up momentum across the country better embody the values of the original Boston Tea Party.

The original Boston Tea Party was a civil disobedience action against a private corporation. In 1773, agitators blocked the importation of tea by East India Trading Company ships across the country. In Boston harbor, a band of protesters led by Samuel Adams boarded the corporation's ships and dumped the tea into the harbor. No East India Trading Company employees were harmed, but the destruction of the company's tea is estimated to be worth up to $2 million in today's money. The Occupy Wall Street protests have targeted big banks like Goldman Sachs, Bank of America, as well as multinational corporations like GE with sit-ins and peaceful rallies.

The original Boston Tea Party feared that corporate greed would destroy america. As Professor Benjamin Carp has argued, colonists perceived the East India Trading Company as a "fearsome monopolistic company that was going to rob them blind and pave the way maybe for their enslavement." A popular pamphlet called The Alarm agitated for a revolt against the East India Trading Company by warning that the British corporation would devastate America just as it had devastated South Asian colonies: "Their Conduct in Asia, for some Years past, has given simple Proof, how little they regard the Laws of Nations, the Rights, Liberties, or Lives of Men. [...] And these not being sufficient to glut their Avarice, they have, by the most unparalleled Barbarities, Extortions, and Monopolies, stripped the miserable Inhabitants of their Property, and reduced whole Provinces to Indigence and Ruin."

The original Boston Tea Party believed government necessary to protect against corporate excess. Smithsonian historian Barbara Smith has noted that Samuel Adams believed that oppression could occur when governments are too weak. As Adams explained in a Boston newspaper, government should exist "to protect the people and promote their prosperity." Patriots behind the Tea Party revolt believed "rough economic equality was necessary to maintaining liberty," says Smith. Occupy Wall Street protesters demand a country that invests in education, infrastructure, and jobs.

The Original Boston Tea Party wanted a stronger democracy. There is a common misconception that the Boston Tea Party was simply a revolt against taxation. The truth is much more nuanced, and there were many factors behind the opposition to the East India Company and the British government. Although the colonists resented taxes levied by a distant British Parliament, in the years preceding the Tea Party, the Massachusetts colony had levied taxes several times to pay for local services. The issue at hand was representation and government accountable to the needs of the American people. Patrick Henry and other patriots organized the revolutionary effort by claiming that legitimate laws and taxes could only be passed by legislatures elected by Americans. According to historian Benjamin Carp, the protesters in Boston perceived that the British government's actions were set by the East India Trading Company. "As Americans learned more about the provisions of the new East India Company laws, they realized that Parliament would sooner lend a hand to the Company than the colonies," wrote Carp.

Progressive political movements, from Martin Luther King to Mahatma Gandhi, have drawn on the original American Boston Tea Party for inspiring civil disobedience against oppression. Indeed, the very first Boston Tea Party was truly radical and faced scorn from elites and conservatives of the era.