Rand Paul, a U.S. Senator representing a major coal producing state, can't get his facts straight about the industry or organized labor. 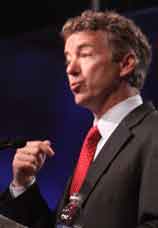 A Google ad that ocassionally displays in the story in the Beckly Register-Herald is ironic to the max: Senator Rand Paul "Sign the right to work petition Obama fears."

Neither the Register-Herald nor CNN have anything to do with the advertising positioning. the positioning is based on a Google AdSense algorithm.

Paul, the Libertarian Senator from Kentucky, wants a new federal law to regulate millions of workers. He is touting a national right to work law as a back-handed way to weaken or abolish unions. The proposed rule could impact every job in the U.S.

Quoting from the Rand Paul ad: "This forced unionism breeds violent strikes and a hate-the-boss mentality which drive good jobs overseas, jack up prices and risk re-igniting inflation: Union bosses use this forced-dues fortune to corrupt our political system with over a billion dollars every election cycle."

These days you don't need a union to develop a hate the boss mentality. Bosses are quite capable of cultivating hatred without any help.

Just ask any union lawyer. Or ask any lawyer that represents a company against unions. It may be the only issue they agree about.

Union members exercise freedom of speech and freedom of association by joining. Those declining to join exercise those same rights.

Paul does have his facts mixed up.

During the 2010 election cycle unions put $55 million into election coffers. That's about $986 million less than Paul and the National Right To Work Committee claim.

All political donations on the national level totaled $1.04 billion, according to MapLight.org, a non-profit public interest group.

Sen. Paul holds some unusual political beliefs when it comes to coal, an important industry in his state.

Paul wants to eliminate federal regulation of the coal mining industry and says the industry can regulate itself.

Paul made that astounding revelation during a speech for the Harlan Center, an organization operated by a subsidiary of Massey Energy. Massey owned the Upper Big Branch Mine in Wyoming County, West Virginia where 29 miners were killed in an explosion.

"Is there a certain amount of accidents and unfortunate things that do happen, no matter what the regulations are?" Paul said at the Harlan Center, in response to a question about the Big Branch disaster. "The bottom line is I'm not an expert, so don't give me the power in Washington to be making rules. You live here, and you have to work in the mines. You'd try to make good rules to protect your people here. If you don't, I'm thinking that no one will apply for those jobs."

Rand Paul is also out of step with the views of his libertarian father, Ron Paul, rumored to be a presidential candidate.

In an interview with National Public Radio, Ron Paul conceded that neither OSHA nor the Mine Enforcement Safety Administration.

Rand Paul's campaign war chest in the last election was awash in money from coal interests.

The Federal Elections Commission does require detailed information on a donor's profession and employer. The requirements make it difficult to conceal who individual donations came from.