Details
by Emery Jeffreys
on 06 February 2007 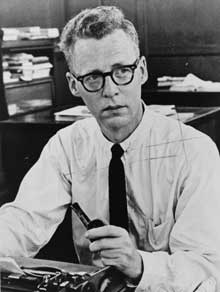 Tom Rutten over at the LA Times has described the new media and it's pack mentality to a fault. Of course he was describing the latest Anna Nicole Smith escapade.

The late Murray Kempton once described editorial writers as "the people who come down from the hill after the battle to shoot the wounded." Nowadays, media analysts are the guys who follow behind them, going through the pockets of the dead looking for loose change.

Being a member of the press, I can't really dress it up any better than that. Especially the loose change part.

CNN broke into it's own news show with a bulletin that her autopsy was underway. Then it broke into its own broadcast to report that the cutting was finished and they didn't know anything.

The last I heard, bulletins were reserved for incoming missiles and presidential assassinations.

The mainstream journalistic coverage of Smith's death is among the first
such stories driven, in large part, by an editorial perception of public interest derived mainly from Internet traffic.

Simply being famous or infamous does not make it news ... unless you are preeminent. Preeminent means you can be recognized by your last name (Lincoln, Churchhill, Stalin, Salk, Roosevelt, Hitler)

Celebrity does NOT make someone preeminent. It's the cult of the personality decried by Studs Turkel.

I. Lewis "Scooter" Libby Jr. would say something with a tragic note of elan: "Gentlemen, being a former member of the bar, I move we adjourn to one."