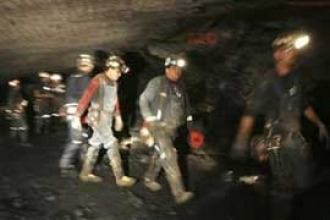 The home page of the U.S. Mine Enforcement Safety Administration contained the latest update about rescue operations at the Crandall Canyon Mine near Huntington, Utah.

Just below it was a statement by Labor Secretary Elaine L. Chao recognizing the sacrifice made by three rescuers who were killed and the six injured during rescue attempts at the Crandall mine.

The third item was an announcement of the 3rd International Mine rescue Conference and National Mine Rescue Contest. The irony of the placement is not lost on anyone familiar with death and destruction in the coal fields. Over at the United Miner Workers of America Web site, there is nary a mention of the deaths of the men in Utah. They were non-union miners.

In sharp contrast, the AFL-CIO blog is filled with accounts of the disaster. Maybe it's because AFL-CIO Secretary Richard Trumka, hasn't forgot his roots at the United Mine Workers. He served as president of the UMWA for three terms.

The airwaves are full of images of the weeping families and rescue teams hurrying about their work. There are also the images of grim-faced officials announcing the latest setbacks.

"We've gone from a tragedy to a catastrophe," said Gov. Huntsman. "We as a state don't want any more injuries. We've had enough."

When I was a reporter covering the coal industry in West Virginia and Eastern Kentucky, I once heard a miner mutter this joke:

Q. What is white and sleeps two?

A. A federal mine inspector's truck

Mine safety is not a joke. It's not a joke to those who lost family or friends in the mine explosion at the Aracoma Mine near Logan, W. Va.

Some mines are safer than others because the union men work with owners to keep it that way. Regulation is spotty.

There are union miners who could make it safer, but work against the company because of the union vs. company thing.

Non-union mines tend to be less safe. There are exceptions.

Mostly it depends on whether the mine is above drainage or below drainage. Below drainage mines tend to create more free methane (the same as the natural gas) because of water seepage. Methane and coal dust is a volatile mixture.

In a dry mine without required water sprays, there is too much coal dust -- dust that can be more explosive than dynamite. The dust causes pnuemoconiosis, the coal miner's version asbestos lung. It's called black lung, and it killed my father. My mother was still collecting a black lung pension when she died.

The biggest part of the problem in the latest disasters was caused by rules approved by the Bush administration. The government allowed rules which allow the exhaust air to go out the same entry as the conveyor belt instead of its own entry. It's better for the mining companies because it's a lot cheaper to create two 50-foot wide tunnels are a lot cheaper than three ... particularly if it is a couple of miles from the work area to the outside.

The danger of having a coal-laden conveyor belt in a cantillation passage is simple. If the conveyor catches fire, the fire is fueled by coal. The fire also gets huge amounts of air from the enormous that sucks stale air from the mine.

At two of the recent West Virginia disasters, the fires were discovered along conveyor belts and the water sprays did not work correctly.

It's Joseph Heller's Catch 22. The fire spread because the ventilation fan was blowing thousands of cubic feet per minute into the fire. This was true at Sago and Aracoma mines. The Aracoma mine is about five miles from my home town and my first new reporting job.

But they couldn't turn the fan off because it would stop the fresh air supply to trapped miners. Rescue teams had to extinguish the fire before they could begin search and rescue.

It's worth pointing out that the Crandall Mine disaster had nothing to do with a fire, just the inherent dangers of room and pillar mining in fairly high coal.

At the Crandall mine and the two West Virginia disasters, rescuers did not know where to begin the search because they had no information about the location of the men.

Most mines are rooms and pillar laid out on checkerboard grids. That method has been in use for ages. Miners use a 100-ton continuous miner to extract coal. To understand room and pillar mining, imagine a checkerboard with the black line between the squares at 25- to 50-feet wide and the squares are up to 60 feet square.

The room and pillar methods leaves hundreds of 50- to 60-foot pillars of coal behind to supporting the roof after the advance mining is complete. That seems like a waste of coal.

The reality is that they don't leave the coal behind.

They begin retreat mining. Miners extract the coal from each pillar as they retreat from the mine. Eventually the roof falls because there are no pillars of coal to support the roof.

The maps of the Crandall Mine show what is obviously room and pillar mining. But mine officials say there was no retreat mining underway - despite a plan filed with MSHA to the contrary.

I suspect the miners at Crandall were in a passageway away from the mine face and there was catastrophic fall. (due to retreat mining???) They were either trapped or crushed. The drilling of air holes is a shot in the dark. But rescuers are a stubborn lot. They won't give up hope until they know there is no hope.

A coal miner knows that if he is trapped by a roof fall, a large group of mine rescue teams will keep up the search unit there is no hope. That's what miners do. Their lives depend on one another. They won't give up hope until they know there is no hope.

The owner of the Utah mine has made a big deal out of explaining that the workers were not doing retreat mining. Really, retreat mining is only done with the room and pillar method.

Work gangs are very good at telling the outside dispatcher their whereabouts. Lives depend on it in case of a collapse or a mountain bump. Lives also depend on very accurate maps. The maps are required by law to be very accurate -- for rescue efforts -- and because they use the maps to determine how much coal has been mined.

Since the Sago explosion and Aracoma fires, regulators have pushed for GPS enabled sensors for each miner so they can figure out where they are in the mine. In the two West Virginia disasters, rescuers had no clue of where to go because of very dense black smoke.

GPS devices would also enable rescuers to know where to drill at the Utah disaster.

GPS enabled sensors for miners is small price to save miners trapped by fires or a huge roof fall.

After the fires in West Virginia, Gov. Joe Manchin said if the coal mine operators didn't get right on some changes in the law, not much mining would get done while he was governor.

He pushed for doubling the amount of oxygen generators for each miner, from one hour to two hours.

The truly stupid thing is having a conveyor belt in an air exhaust. Before the feds allowed the federal law to be changed, it was literally a crime to have anything combustible "inby" the last open crosscut in a coal mine.

By the way, at last crosscut is where the fireboss uses a flame safety lamp to measure for methane gas. That sounds like an accident waiting to happen, but it is the best way of measuring for gas. A seasoned fireboss can examine the flame and determine if methane gas in present. A fireboss is state-certfied foreman. Firebosses wield a lot of authority. One word from the fireboss and mining is halted until the gas clears. Nobody overrules the fireboss -- not even the owners.

Continuous miners have electronic devices called canaries to measure gas. They are actually colored yellow just like the canaries used by miners of old. If the canary died, the gas was getting high.

If the gas level gets high enough the electronic canary shuts down the machinery. Practically all of the equipment in coal mining is electric powered by hydraulics. All the electrical equipment for obvious reasons is explosion proof.

And how do I know all this?

Seven years covering the coal industry for The Logan Banner. I also had a slight edge. My publisher sent me to school. I earned a miner's certification and a few college classes in the federl Coal Mine Health and Safety Act.

Once I was covering a very controversial disaster at Craynor, Kentucky for the Appalachian News-Express in 1982. It was a dust explosion at a mine and seven were killed. I literally beat the Lexington Herald and the Louisville Courier-Journal on high profile storie, until old friends Lee Mueller and Ralph Dunlop joined the fray. Dunlop is now city editor at the Courier-Journal.

Some reporters were asking really dumb questions. Kentucky Mines Commissioner Willard Stanley was aggravated. "Just read the stories by Jeffreys." he said. "He gets it right every time."

That was the first time I was ever singled out in public for getting the facts correct.