Details
by Emery Jeffreys
on 11 September 2010 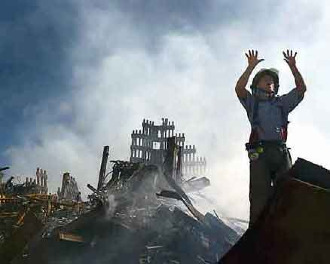 First, Sept. 11 was hijacked by a band of terrorists who crashed airliners into the World Trade Center at the financial heart of the nation, the Pentagon and a field in rural Pennsylvania.

The attack on the World Trade Center, an event that once unified Americans, now divides them and the divide may become a chasm.

The events of Sept 11 shroud the horrific event in controversy.

A large percentage of Americans and people around the world do not believe the truth has been told.

Nine years ago it was hijacked by a band of terrorists who crashed airliners into the World Trade Center at the financial heart of the nation, the Pentagon and a field in rural Pennsylvania.

On the fifth anniversary of the event, the conspiracy theory was advanced by Dylan Avery in the underground film Loose Change. Avery's film claims the collapse of the buildings was caused by explosions.

Five years ago Brigham Young University professor Steven Jones said that explosives were used to topple the World Trade Center. However, there was no evidence of explosives in the rubble, known as "the pile."

Three days before this year's anniversary, a group of engineers and architects supported that claim again.

Architect Gage claims World Trade Center 7, a 47-story building that was not hit by an aircraft, yet collapsed in free-fall acceleration and in a manner consistent with a controlled implosion: "Government investigators at the National Institute of Standards and Technology (NIST) have been forced to acknowledge the free-fall descent, an indicting fact, after being presented with analysis by AE911Truth petition signers," Gage said.

The group does not explain that time after time, independent experts have yet find evidence of explosives.

Nor does the group touch the Al-Qaeda claim of responsibility for the attacks.

Al-Qaeda's head, Osama bin Laden, an engineer, claimed in taped conversations the heat generated by the crashes by the aircraft weakened structural beams. The weight of the floor above the fires eventually weakened and broke the beams. As the floors collapsed, the weight multiplied with each floor that collapsed.

Other facts that AE911Truth.org supporters have uncovered in the course of examining the forensic evidence include:

Supporting Gage's arguments is a petition with 1,270 architect and engineers.

The group wants yet another investigation and a grand jury probe.