Details
by Emery Jeffreys
on 01 September 2011 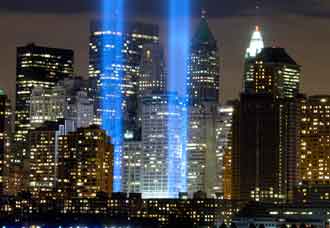 NEW YORK — Ten years later, the void left by an attack on the World Trade Center wraps around the silent, empty space in Manhattan left by the twin towers.

The airliner attack and collapse of the buildings on September 11, 2011 is seared into the nation’s conscience. Many consider it the nation’s darkest hour since Japan bombed Pearl Harbor.

The same day, hijacked airliners crashed into the Pentagon and a field near Shanksville, Pa. Before the the crash, passengers revolted to sieze control of the aircraft from hijackers.

At the Pentagon, 125 people, including 55 Defense Department workers, died in the crash and fire.

{sidebar id=11}{sidebar id=12}Today, the debate about what happened and who is to blame rages on like an inferno that can’t be extinguished.

The words al Qaeda and the name of terrorist Osama bin Laden are spoken with the familiarity and contempt of a crack dealer living down the street in a bad neighborhood.

Two wars in relentless pursuit of leader of bin Laden and dozens of his al Qaeda lieutenants seem to have no end.

The wars seemed to unite the nation in a war against evil. Now it divides the nation.

The dust may never really settle. The rubble of mental remnants may never be cleared away from our minds or the streets of New York. The damage goes much father.

It seeps into the far reaches of Iraq, Afghanistan and Pakistan. Muslims are slaughtered daily by snipers, car bombs and suicide bombers.

Osama bin Laden's forces took a very heavy toll on life in New York City that day. The attacks were also aimed the way of life in the U.S. Despite the heavy toll of U.S. lives in our own country, al Qaeda has killed more muslims than Americans.

A stunning 85 percent of al Qaeda’s victims are muslims, the Washington Times reported.

Between 2006-2008, the number of Muslim deaths due to terrorism skyrocketed to 98 percent.

Abdullahi An-Na'im, a law professor of Law at Emory University, says terrorism is not coming from mainstream Muslim communities.

"In Iraq, Afghanistan and Pakistan, there are, by far, more Muslim victims of this terrorist violence every day,” An-Na'im said. “The problem is a global human problem, not an American problem. To see the arbitrary violence and terrorism is an enemy of every people and every cause."

After Osama bin Laden died, Mark Ensalaco of the University of Dayton, Dayton Ohio, said: "This will not end until senior clerics preach that blowing yourselves up in the name of martyrdom and Islam isn't acceptable."

Ensalaco is director of human-rights studies and former director of international studies at the University of Dayton in Ohio.

“The fact is that the vast majority of al Qaeda’s victims are Muslims: The analysis here shows that only 15 percent of the fatalities resulting from al Qaeda attacks between 2004 and 2008 were Westerners,” according to the report, titled “Deadly Vanguards: A Study of Al Qaeda’s Violence Against Muslims.”

“Many victims of al Qaeda and its affiliates have been Muslim, and people in the Muslim world know that. This explains why many Muslims deplore al Qaeda, and why you see more Muslim voices these days expressing strong opposition to al Qaeda and the ideology it espouses,” the report said.

The World Trade Center attacks led to increased awareness of terrorism among Americans post-9/11, and the increased expenditure of resources to enhance U.S. homeland security and intelligence gathering.

“The fact that terrorists have an infinite supply of targets, and thus can shift their focus in response to defensive measures, means that evaluating the relative ‘safety’ of the U.S. from terrorist attack is extremely problematic,” said Derick "Sandy" Hulme, professor of political science at Alma College. His teaching focus is terrorism and American foreign policy responses to terrorism. 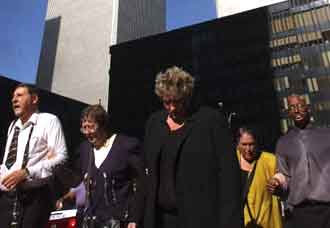 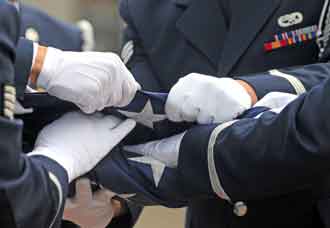