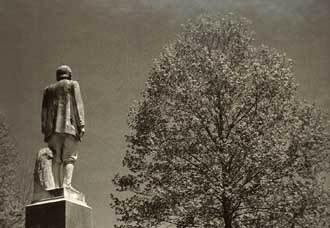 SARAH ANN, W.Va. — William Anderson "Devil Anse" Hatfield, one of the leaders of the most famous blood feuds in America, renounced his sinful ways in 1911 and was baptized in cold waters of Island Creek in Logan County.

On the advice of preacher "Uncle" Dyke Garrett, Devil Anse, then 72, went forward at a revival meeting and received Jesus Christ as his Lord and savior. He was baptized near his home in Logan County.

Mingo County songwriter Jimmy Wolford recounted the event in a song from an album he wrote about the famous feud.

Island Creek was cold when Devil Anse went under, but when that bearded man came to the top, he was shouting and a singing, the rifle fire stopped ringing and the water in Island Creek turned boiling hot.

A photo from September 1911 shows the patriarch on the banks of the creek that day surrounded by witnesses. For Garrett, it was a baptism he'd been waiting his whole life to perform.

The baptism supposedly marked the end to nearly half a century of mayhem, murder and shooting that claimed a dozen lives among the Hatfields and McCoys.

Neighbors say Devil Anse spent the last ten years of his life in peace, knowing that he was forgiven, his sins washed away in the cool mountain stream.

He died of pneumonia in Jan. 1921 at the age of 81. Thousands of people attended one of the largest funerals ever held in Logan County. Passing of the famous feudist was marked in a brief obituary on the front page of the New York Times.

In 1926 the family erected a statue of Hatfield in the family cemetery high on a hill in Sarah Ann. It was imported from Italy, sculpted by stonecutters who had only seen photos of the man.

The monument, listed on the National Register of Historic Places, is a silent testimony to his 1911 baptism. Hatfield renounced a way of life that was embedded in Appalachia.

He vowed never to set foot in Kentucky again. Hatfield's statue faces away from Kentucky.

Despite the conversion, there are many accounts from the early 1900s of the heavily armed Hatfield clan walking down the streets of Logan.

It's practically impossible to separate fact from fiction, but the History Channel tries with its Memorial Day miniseries, "Hatfields and McCoys."

It begins with two civil war comrades and close friends Devil Anse Hatfield and Randall McCoy (played by Costner and Paxton) returning home at the end of the war to find tensions and misunderstandings between the two families rapidly escalating and eventually erupting into an all-out war.

It’s the true American story of a legendary family feud—one that spanned decades and nearly launched a war between Kentucky and West Virginia.

As hostilities grow, friends, neighbors and outside forces join the fight, bringing the two states to the brink of another civil war.

The six-hour series features some of Hollywood’s top talents: