KANSAS CITY, Mo -- Miranda Priestly, the ruthless and cynical magazine editor portrayed by Meryl Streep in the "The Devil Wears Prada," cannot keep her employees happy, a trait shared by many bosses. 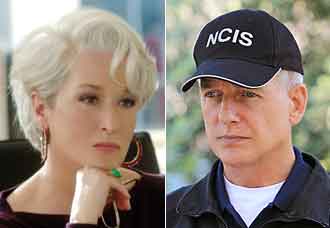 Members of the the International Association of Administrative Professionals were asked to rate the worst and best bosses from TV and the movies. Many of the names came as no surprise. Mr. Hart from "9 to 5" was a popular pick for worst.

A few were unexpected. Steve Carell's character from "The Office" appears on both the best and worst list.

10. Jack McCoy, "Law & Order" -- Passionate, driven and fair
9. Sam Malone, "Cheers" -- Great listener who knows how to give others a second chance
8. Capt. James T. Kirk, "Star Trek" -- A boundary pusher who brings out the best in others
7. Col. Potter, "M.A.S.H." -- Doesn't pull rank and knows how to bend the rules
6. Michael Scott, "The Office" -- He means well
5. Maxwell Sheffield, "The Nanny" -- Understanding and patient
4. Nick Fury, "The Avengers" -- Always make sure his team has what it needs to succeed
3. Bob Newhart, "Bob Newhart" -- Understands that his office pro is invaluable
2. Jack Shepard, "Lost" -- Inspires excellence, promotes unity and recognizes talent
1. Special Agent Leroy Gibbs, "NCIS" -- Sets clear expectations and protects his team

The humorous list does provide insights into the qualities that office professionals want in their managers and executives. Being crude, incompetent and abusive can earn you a place on the hated list of any employee, as evidenced by characters like the gruff chef Mel Sharples from "Alice."

But particular animus is saved for bosses who are high handed and dismissive, like Mr. Hart from "9 to 5."

The best list suggests that employees can be very happy working for a demanding boss like Jack McCoy of "Law & Order," as long as it's tempered with some old-fashioned compassion like the beloved Bob Newhart. If you're a boss, the best thing you can do is channel your inner Jack Shepard and lead your team to success.

IAAP created Administrative Professionals Week, April 21-27, to honor millions of office professionals around the world who make their bosses look good every day at work.