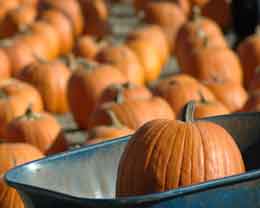 At Thanksgiving the nation gives thanks to God for the harvest and expresses gratitude for freedom, family and good fortune.

The Pilgrims, early settlers of Plymouth Colony, held a three-day feast to celebrate a bountiful harvest in autumn 1621, an event recognized as the nation's first Thanksgiving.

Thanksgiving became a national holiday in 1863 when President Abraham Lincoln proclaimed the last Thursday of November a national day of thanksgiving.

New Deal President Franklin Roosevelt ordered that Thanksgiving will be celebrated on the fourth Thursday of the month to encourage earlier holiday shopping, not on the occasional fifth Thursday. Roosevelt's proclamation led to two other holidays, Black Friday, the first shopping day after Thanksgiving, and cyber Monday

{sidebar id=4}That first Thanksgiving is minuscule compared to those who give thanks in 2010.

An estimated 117 million U.S. households across the nation are potential gathering places for people to celebrate the holiday.

The number of places in the United States named after the holiday's main course. Turkey, Texas, was the most populous in 2009, with 445 residents, followed by Turkey Creek, La. (362) and Turkey, N.C. (272). There are also nine townships around the country named Turkey, including three in Kansas.

Places and townships in the United States that are named Cranberry or some spelling variation of the red berry (Cranbury, N.J.), a popular side dish at Thanksgiving. Cranberry Township (Butler County), Pa., was the most populous of these places in 2009, with 27,560 residents. Cranberry township (Venango County), Pa., was next (6,774).

Number of places in the United States named Plymouth, as in Plymouth Rock, the landing site of the first Pilgrims. Plymouth, Minn., is the most populous, with 72,849 residents in 2009; Plymouth, Mass., had 56,842. There is just one township in the United States named "Pilgrim." Located in Dade County, Mo., its population was 126 in 2009. And then there is Mayflower, Ark., whose population was 2,257 in 2009.

The number of turkeys expected to be raised in the United States in 2010, down 2 percent from 2009. In 2009, the turkey harvest was valued at $3.6 billion, according to the U.S. Department of Agriculture.

The preliminary estimate of turkeys Minnesota poultry farmers expect to raise in 2010. The Gopher State was tops in turkey production, followed by North Carolina (31.0 million), Arkansas (28.0 million), Missouri (17.5 million), Indiana (16.0 million) and Virginia (15.5 million). These six states account for about two-thirds of U.S. turkeys produced in 2010.

The forecast for U.S. cranberry production in 2010. Wisconsin is expected to lead all states in the production of cranberries, with 435 million pounds, followed by Massachusetts (195 million). New Jersey, Oregon and Washington are also expected to have substantial production, ranging from 14 million to 53 million pounds.

The weight of the harvest producing that popular Thanksgiving side dish, sweet potatoes in 2009.

Total production of pumpkins produced in the major pumpkin-producing states in 2009.

The nation's forecasted tart cherry production for 2010 totals 195 million pounds. The majority (140 million) will be produced in Michigan.

The total volume of wheat - the essential ingredient of bread, rolls and pie crust - produced in the United States in 2010.

The quantity of turkey consumed by the typical American in 2007, with no doubt a hearty helping devoured at Thanksgiving time. Per capita sweet potato consumption was 5.2 pounds.

Source: U.S. Department of Agriculture as cited in the Statistical Abstract of the United States: 2010, Tables 212-213 . The Turkey Industry

The value of turkeys shipped in 2002. Arkansas led the way in turkey shipments, with $581.5 million, followed by Virginia ($544.2 million) and North Carolina ($453 million). In 2002, poultry businesses with a primary product of turkey totaled 35 establishments, employing about 17,000 people.

Retail cost per pound of a frozen whole turkey in December 2008.